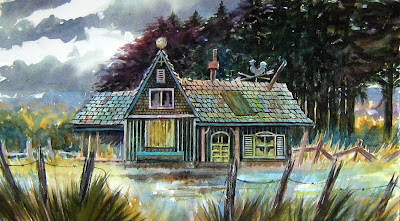 Okay here's the story. When I was a kid this was the house of a local "entertainer". By day she read taro cards and tea leaves. She stopped short of gazing into her crystal ball, but she did mount a glass float on her roof, a symbol of her trade I suppose. The interesting thing about the float was that she had figured out how to light it up with a red glow. It had to be kerosene or candles because there was no power. So I guess her income generation program involved extended hours. She didn't close day or night. It was near the beach, a shanty with log "ginger bread" details and pretentions to a Queen Anne Style. Another comical aspect was that because the shack had no foundation it was sinking so you had to stoop to get in so it kinda looked like a hobbit house. This is my idea sketch, just a doodle, the trees are too red, the spot of light leads your eye out of the picture etc...I am collecting ideas-painting on scraps just gaining momentum. __________________
Posted by Ron Morrison at 11:48 AM 26 comments:

Idea For a West Coaster 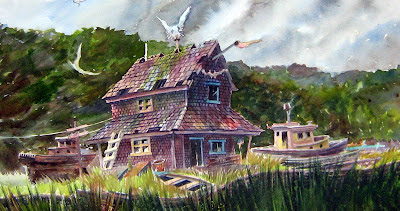 I have always thought the Californian watercolourists of the mid twentieth century were boffo superb. Interpretive, full of motion, light, colour...just all round fabulous. This is my salute to them,
especially Duane R Light. I am going to refine this idea.
Posted by Ron Morrison at 6:30 AM 20 comments: 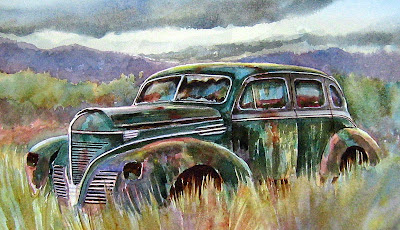 This is the final result of a step by step demonstration I did for "Paint Doodles". Bink to blow for greater appreciation of nothing in particular and everything in general.
Posted by Ron Morrison at 6:38 PM 19 comments: