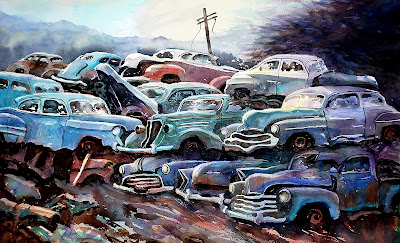 I bashed this off to illustrate the technique of "underpainting". Its a complicated compo that will probably never allow for a good painting but its fun for me to try.
The notion that saved whites produce areas of effective high-light is not entirely satisfactory to me. Rather I prefer saved areas of underpainting to produce maximum glow in combination with saved pure whites. You can use three primary stains, that's the most common/popular choice, I think. Just to make things interesting I used Cobalt Turquoise, Winsor Orange and Naples Yellow, which, of course are not primestainers. Then I used a cheapo purple to block in shadow areas. If you look at the reflected light areas you can see the various combinations of under hues and final touches with these same hues. The painting glows like kryptonite (only yeller) in real life.

For the darks I used B.S. and FUB.

When you underpaint the colours look dark but they almost disappear later on as the darker colours are placed. I use a fairly limited palette and include the underpainters in the program all the way through.
Posted by Ron Morrison at 1:17 PM 12 comments: