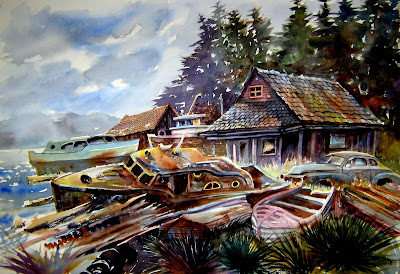 Bashin' It Till I get It
I am after that breezy west coast feel...motion,colour, fun and narrrative content. Calligraphic brush strokes, rich darks and clutter, sweeping shapes and morphed forms...someday I'll get it. Full sheet, I almost always use a full sheet of arches 140 C.P. with W/N as the core of the colour program.

The easiest way for me to get closer to what I think I am after is to let'er rip with a compo that I have already worked out. I wanted to squash this compo a bit and make the shapes more linked and flowing.

Since I am a thin air painter (they are pulled out of thin air) its a challenge to get the thing to make any kind of sense...

The Preserve of Captain Flood 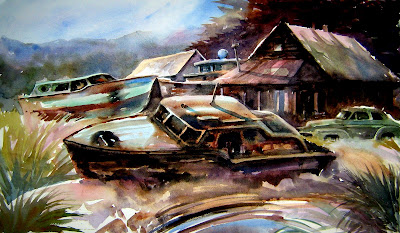 "Captain Flood", sounds like a pirate, but no, he was a fisherman of indeterminate origin with a proclivity for gambling away the profits. A poker player before all the fuss. A shack on the beach, where women with dubious reputations and colourful dresses visited and occasionally sat out on the porch, was the off season domain of the Cap'n. We watched from down the beach, much entertained by the scandalous proceedings. The abandoned site brings back memories of how the beach was before the days of high taxes and big houses. Bink to BLOW!
Posted by Ron Morrison at 7:28 PM 10 comments:

Where Ever You Go There You Are 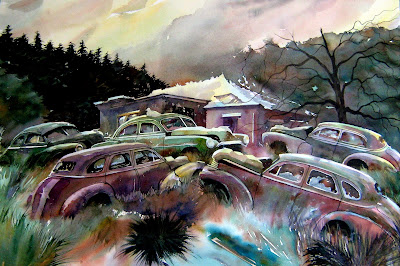 The Inheritance of John Innes "Office" Rocker
In the pantheon of all great nick-named individuals, my buddy John Rocker, stands tall. As the studious son of a notorious father, he spent many childhood hours in his room reading, organizing his baseball cards and generally staying out of the way of his ol' man. His dad wasn't that bad a guy but he wasn't a citizen either and he wanted junior to get out into the world and let some daylight into the swamp. Which was his way of saying that John should follow him into the logging biness and become a professional drinker who collected his wrecked cars out back.. Well John, of the delicate sensibility, resembled by poetic inclination more his gentle mother than his dad. But here's the fun, his mom's maiden name was "Innes" and in the habit of giving the first born male his mother's maiden name, he was christened, John Innes Rocker and they called him Innes. Well, Rocker the dad, when asked about the whereabouts of his son would always say, "Innes office" and not in a proud tone but rather as if it was the shame of the whole outfit that the boy took after his mother, just for comedy of course. All righty then, as in the case of good puns and great nicknames the symmetry was obvious and brilliant because John Innes "Office" Rocker was both "in his office" and "off his rocker" at the same time so how could he help becoming "Office" and then Offs for short.
When the ol boy died, Offs inherited the junk collection and the shack where he had studied as a child. He never new what to make of any of it and maintained he had been delivered to the wrong family as a baby and that was that. I, on the other hand, drank beer with his dad (later on) and shared his love of junk. Offs got a degree in marine biology and then maritime law.
Posted by Ron Morrison at 8:39 AM 12 comments: