A friend of mine grew up in this farm house. It was a warm friendly place with stuff in the oven baking all the time and kids hollering and dogs barking. There was no shortage of dandelion wine and my buddies old man smoked big honkin' stinky cigars. We rode to school in the back of this sedan delivery with the yapping dogs licking our ears. There are a lot of old houses on the back of farms all through the valley. Properties have been subdivided and new houses built. My buddy is a developer and his ragtag bunch are very prosperous. He had a younger sister.... 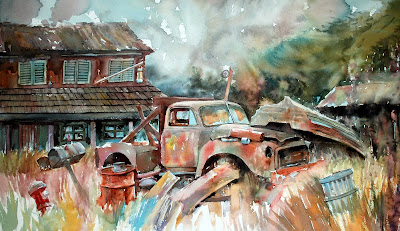 Bink to explore the inner reaches of the watercolour world!
Posted by Ron Morrison at 7:29 PM 4 comments:

This is a sad story, I admit as much. Miss Wilson was a grade two teacher at the elementary school that I attended. It was a country school on a chunk of land cut out of a farm and donated to the school board in the twenties by Miss Wilson's family. She went to normal school and started teaching, conveniently enough, at the school on the land her grandparents donated. This would be about 1956, I think. By the time I got there she had learned to drive and had set up camp in this house which was also on the family farm and was old even then. I guess it had been her grandparents shack or something. She bought this Dodge and was all set, short walk to work, a cruiser for going into town, in a word-independence. My parents knew her parents, but I never had her for a teacher, although my brother did. Half way through 1960 she got sick and was replaced by an old battle axe the kids called "Bullfrog". She as much as vanished except we knew she was in her house being looked after by her mom. She later went to hospital, where she died of leukemia in January of 1961. She was young and pretty and then she wasn't. Nobody ever lived in the house again and the car is still sitting there forty-seven years later on the farm her nephew now owns. I guess its sort of a shrine and I drive by it all the time and think about her often although I hardly knew her. (As a side note my dad died three years later of the same thing...musta been the water.)

I did this with no drawing, just painted it to see if it would work, I'll paint it again and pay more attention. Its a full sheet of the ol'arches 140 C.P. with assorted paints some of which were payne's gray, yellow ochre, burnt umber, cobalt blue, rose madder, cobalt green...I think that's it. 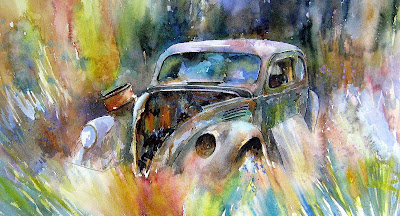 Now, I may not be able to explain this clearly but I'll give it a try. When we were in high school I had a buddy named Lorne who was a Ford fanatic. We called him Ford Lorne. He always wanted a five-window coupe, but ended up with a four-door sedan his dad gave him for graduation. He was sorta aggrieved about the whole situation and we just had to call him "Four Door Lorne". Well as monikers go it was cumbersome so he became Four Lorne and then just plain Forlorn. To this day he is still Forlorn to his friends and ironically he's quite a happy chap. This car was acquired later on, its a five window coupe, but it just sat and is now truly forlorn rotting at the back of the property. (Don't blame me, I don't make this stuff up...wait a minute maybe...)
Posted by Ron Morrison at 2:04 PM 7 comments: 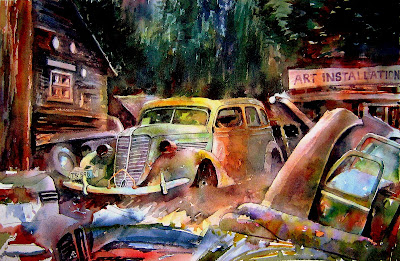 About thirty years ago someone started to collect old cars and parts and deposit them on leased land at the bottom end of a wooded acreage.. He placed a few in what appear to be aesthetically pleasing positions and stripped a bunch more down to parts and positioned the pieces in rows and stacks. Only he knows what he had in mind. What looks like a junkyard is a deliberate tableau. There is moss everywhere and what light penetrates the trees lands on fenders and chrome and glass and bounces off again. Bus loads of German tourists used to visit and the whole thing became too much as the "installation" became popular and an intrusion on the privacy of the owner of the property. There are a couple of strange buildings with trees as corner posts full of parts and memorabilia. All in all a very eerie creation.