When the Wind Blows 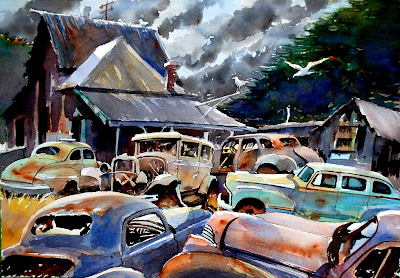 I like to invent scenes that are hopefully resonant, the motion, the light...the way things were and still are in some places. Junk, clutter, the debris of the mid-last century, the fodder that I am compelled to re-arrange in my paintings to create my scenes. It is just plain fun for me and the reason I paint.

I am still working on this idea, there are a few things that are unfinished, but you can fill in the details like the unfinished chimney top...its the idea that is important. This is the middle section of a bigger painting that I thought could stand on its own. I love this breezy style of painting and I admit to being stuck not only in another world of old stuff but also an admirer of older painting styles and I lament their loss.
Posted by Ron Morrison at 7:51 AM 5 comments:

The Encore Performance of the Dowager Queen of Desolation Sound

When Vasiliev DeFrenz, a seminal influence on the local art scene, first batched up one of his "industrial art" pieces I was a teenager industriously working on perfecting the mechanics of a whole arsenal of bad habits. F'rinstance, I had taken up smoking filterless "Export A" cigarettes, learned how to roll a joint and was an apprentice acid dropper. My grandfather had provided me with the Panhead and I was generally a terror to no one in particular and a hazzard mostly to myself. The man I credit with my early career as a miscreant was the aforementioned Vaz DeFrenz ("seminal influence"...get it?), a charlatan of the first order and an instructor par excellence in the fine arts of dissolute inclinations and pastimes.

In the late sixties it was possible to get a Local Initiative Grant for any ol'hairball scheme and Vaz's proposal looked good on paper. Rolly paper, no doubt. He wanted to rescue an abandoned fishboat and restore it as an art piece, namely splash a coat of paint on it, drop it in the drink and hope it floated long enough for everybody on board to get thoroughly stoned. A noble enterprise in the opinion of the under-employed and heartily endorsed by the local council who were a bunch of comedians themselves. So, all righty then, grant given, boat located and hauled out and patched for painting. The usual rainbow- gaudy splash and dash paint job and sploosh back in the chuck. Well, some saboteur with a talent for the comedic had chipped out the seal around the propeller shaft and it took about five minutes for the boat to sink, right in front of the village council and the local M.L.A. It was seriously among the most pant-wettingly funny incidents that I have ever witnessed. Vaz beat it out of Dodge after draining the grant fundage into his pocket and I never saw him again.

The boat was eventually refloated but it was washed up in a storm and settled on the rocks across the bay and you can see it as the sun goes down, resplendent in it's glorious hues.