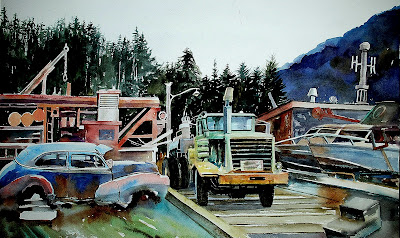 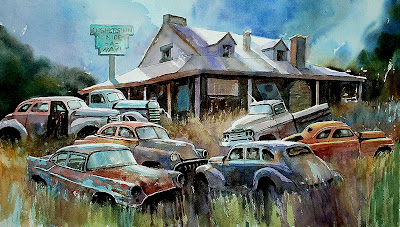 Even though I made it up, the memory of this place is burned indelibly in my mind. When I was about seven, my mom was scandalized on account of the ol' man allowing me to accompany him to this exotic locale for a little reconnoitering regarding an estimate for some concrete work and possibly some welding. He had been asked by Miss "Dish" as she was known, to maybe build a vault for the considerable proceeds from this shadowy operation, just in case of any attempts at unauthorized withdrawals. My mom wanted to know just exactly how she chose him..."lucky him" as she put it.
A little background on the "Dish" is in order. From what I can gather, Floyd Kreshin came home from Dubya Dubya Two with a bad case of the "traumatics" and it wasn't improved when he discovered his b'loved shacked up with a certain bad actor, name of "Wrecker Walt". They were holed up in this beat down hotel turned "House of Ill-Repute" carrying on a brisk biness. So Floyd lit out for more salubrious surrounds, leaving Alice to her own devices.

Alice being both pretty and able to keep a confidence was nick-named, "Dish" which when combined with Kreshin formed Dishkreshin (discretion). She conveniently became "Miss" again after Floyd beat it outa town, even though she kept his name and probably was still married legal-wise.

Eventually the operation shut down, due to law enforcement niceties and the alleged violation of social mores. Restraint of trade, more like it. Walt used the yard for storing impounded heaps after Alice cleaned out the vault and he had to go back into the towing biness. I remember the smell of smoke and alcohol and perfume that soaked the place even though I visited during off hours...
Posted by Ron Morrison at 11:43 AM 10 comments:

This is another version of Tin Clusters, just working out the idea. " Bink" to explore the inner workings... 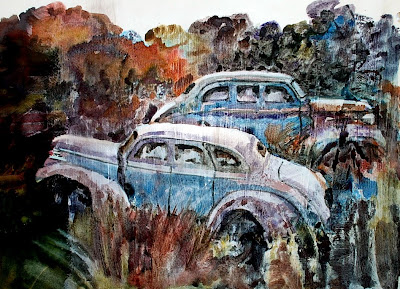 Gesso or White Acrylic, Slip Sliding Away
I opened the bottom drawer and took out my jar of gesso, it was solid as an ice cube but not as inclined to melt. So I slapped a coat of white acrylic on an old failed painting and played...I think if I sanded the white or varied the brush strokes a little when shellacking on the white it might be something I could work with...
Posted by Ron Morrison at 5:19 PM 10 comments:

The Grass Grows Under The Chuck 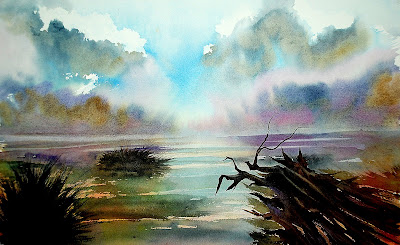 I live on the coast of an island. We have purple sunsets. We have grass that is underwater at high tide. There are log sculptures on the beach that escape from booms and trees that fall from the cliffs and end up either branches down or roots down. Sometimes we can walk under these trees. This is my imaginary version of an island beach, artistic license and creative editing at play, just some fun...
Posted by Ron Morrison at 6:18 AM 18 comments: 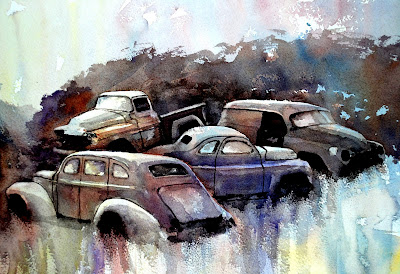 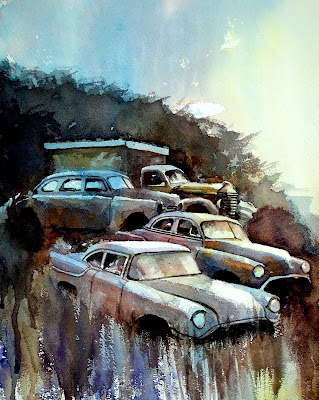 When I used to go hunting wrecks it was an almost mystical experience. I would find clusters of heaps that seemed left just for me. Here's a double cluster in epiphanic illumination...

One painting or two, these images are primed for the catalogue... 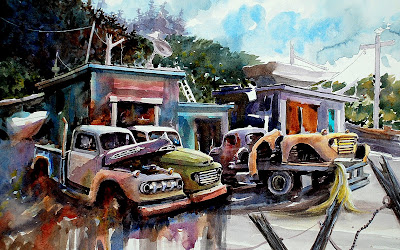 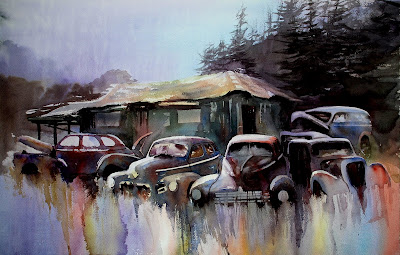