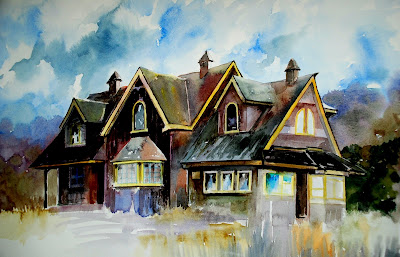 Come on now, you know its not going to be flowers...fascia board on a house.

This house looks old but it ain't. There are stranger people in the world than me, a few, which is either reassuring or disappointing. One of them is the guy that built this house. He fiddled and fussed with the finishing and the deterioration caught up with him. The house is less than twenty years old and the onliest thing that has survived with its spirit intact is the yellow trim and that is fading fast. 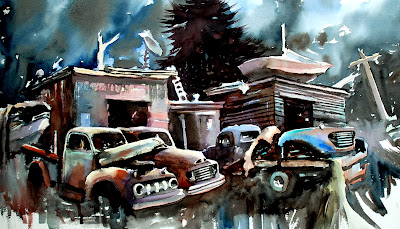 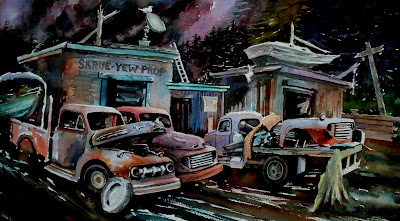 Now you know that I have no patience for bucolic scenes, that I can't sit somewhere and plein air a bunch of cows. Its just no fun for me unless I am batching up a scene of my own..mine all mine I tell you, my little kingdom where I am...oops sorry, dee-lusions of grandeur..
The fun for me is to just doodle up something and then make a pic. They are goofy, I know, but thats half the fun. I am a second rate pulp fiction painter...

This is my first sketch of this compo, to see if there is any hope...I need shadows and some more detailing. I love the chaos, the clutter, the shapes the motion...the story.

Chrysler in the Dell 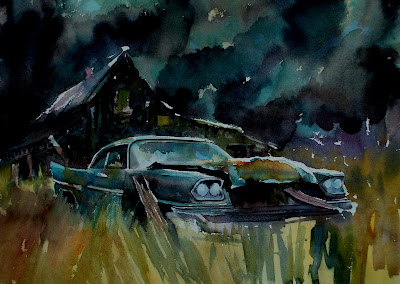 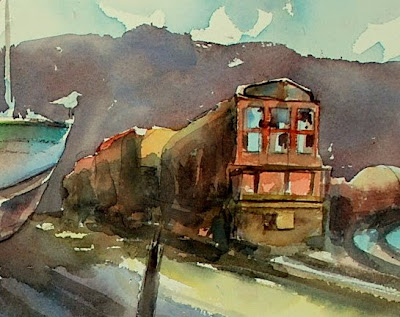 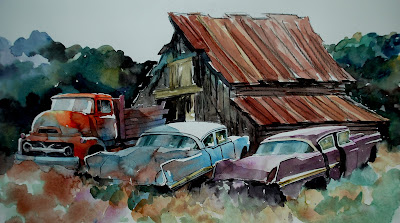 I need to have a breezy sketch style, quick and fun on the ol hot press... bink to blow, up.... 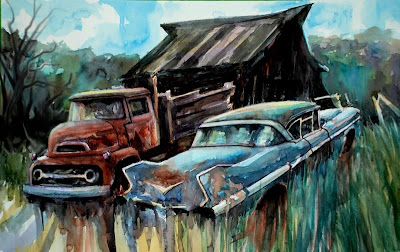 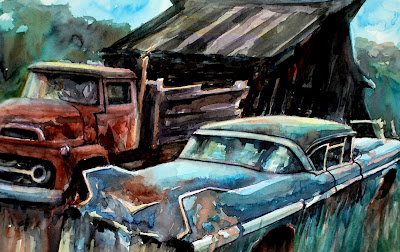 Just playing on hot press slippery paper. Cropped to get fun compo...Bink to explore the domain of uninhibited colourplay.... 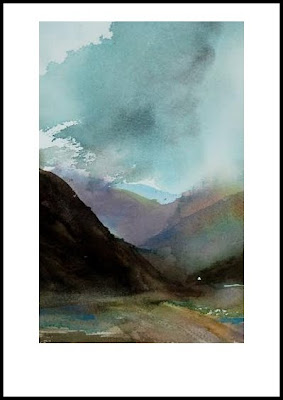 High Water in the Slough 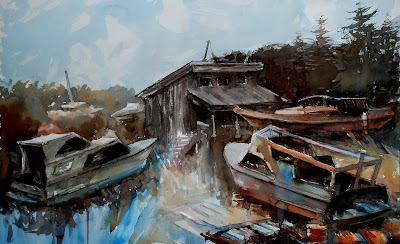 This is my idea painitng, just trying to work out the compo... bink to see the inner workings... 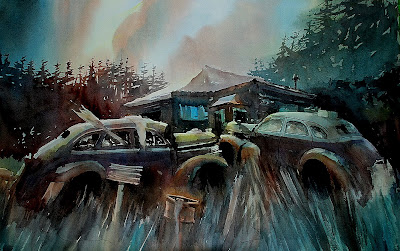 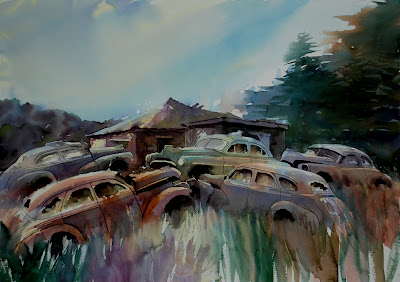 How Are Things in the Old Neighbourhood? 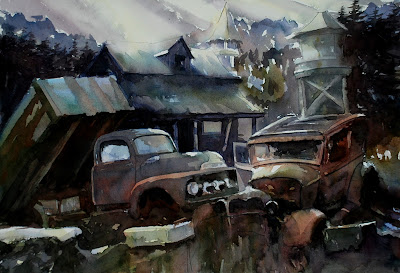 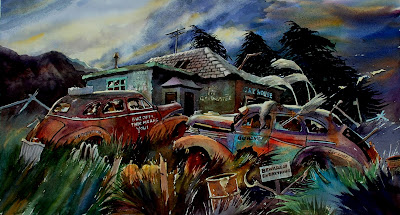 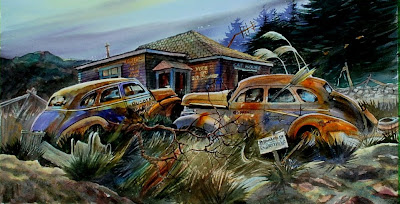 This rambling wreck of a painting needs to be simplified and tied together better, but it serves as an idea painting..its the uze, a full sheet of unadulterated hay-wirosity.

Bunch of low-lifes (mostly my friends), minor league scofflaws since the drug laws were relaxed, squatted in this shack and conducted their dubious biness deals. One of the girls loved cats and some clever chap figured he would advertise in the faint hope of an economic gain or at least getting a laugh...as cathouse means whorehouse which I am sure most of you sophisticates know. The house, being old and reputedly the scene of a fatal stabbing, had slogans and warnings all over it. So "VOTE FOR GOLDWATER" and "THE CATHOUSE" becomes "The Goldwater Cathouse". I'm sure Barry would be impressed. (1964? Presidential candidate)

I think the terlit needs a proper burial...I was gonna put "We won't take any crap outa you" right next to it but too many letters. The pampas grass are in full bloomage in my front yard so I figured I put'em in...
Posted by Ron Morrison at 10:17 AM 8 comments: 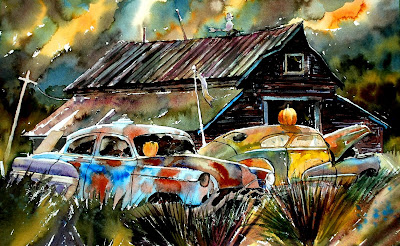 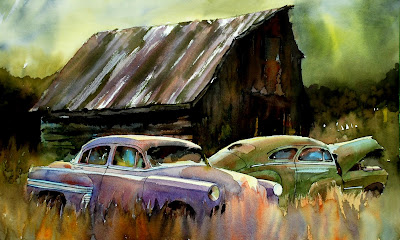 Yard Mates (Hanging Out for the Long Haul) 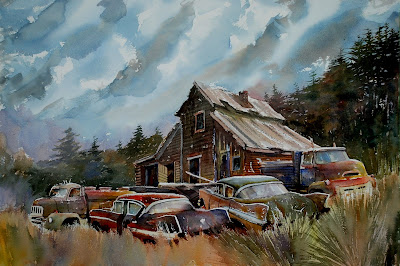 The Pessimism of I.M. Beaton 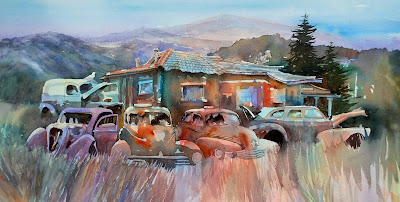 All righty then, this may take some 'splainin', so bear with me...My grandmother was a Rosicrusian who would tell anybody who would listen that, "when she went, she wanted her ashes spread in her garden." As a precocious child I figured I could untangle this riddle. A Rosicrucian must be some kinda gardener specializing in roses. But where was she going and what did "ashes" have to do with anything? If I'm a nut case its partly her fault, I'm pretty sure. Her husband was a newspaper editor for the old Vancouver Times and a an amateur painter. He checked out the week I was born. All through my childhood I looked at two muddy oil paintings that hung above the chesterfield in Granny's livingroom.
My brothers used to ask our dad to draw stuff to illustrate the stories he would cook up for us kids. He couldn't draw worth a lick but he gave it a shot. My brothers were always impressed, but I would look at the drawings and shake my head, the ol' man would grin and that was that. When I would draw something he would show his poker buddies and generally advertise the productions of his oldest kid. Well he packed it in too, leaving the whole outfit shy of male influence. As luck would have it, my grandmother had a brother. In retrospect my great uncle was prolly a full blown loon, that no responsible parent now would let a kid anywhere near. But times were different and I was shipped off to see visit the iconoclastic recluse (that may be redundant, but you get the idea) for weeks at a time during the summer. I would be about ten and his shack was in the interior and it was hot and magical and I learned a lot of stuff that I maybe shouldn't have.
I called him, "Gunk"..a contraction of great uncle. Thing is, the ol boy was sort of a patron of the arts and a polymath and encouraged me to draw and paint. He was an incurable contrarian and encouraged me to question everything as a matter of principle. He had (wait for it, you can see it coming) wrecked cars and junk and told me what they were and how they got to his yard. I loved the idea of the junkers and the designs, colours and history...I was hooked.Gunk sent me supplies, books and encouragement until he joined the rest of the crowd up above (I hope). He lived to see my first big junkyard painting and was over the moon about the whole production, somebody else saw what he saw...beautiful junk.
Gunk's real name was Ian Marshall Beaton. An appropriate name for a natural "bad attituder" who didn't see any real future for mankind, yet whose bright light shone on his grand nephew (or whatever I was).
Posted by Ron Morrison at 12:47 PM 14 comments: 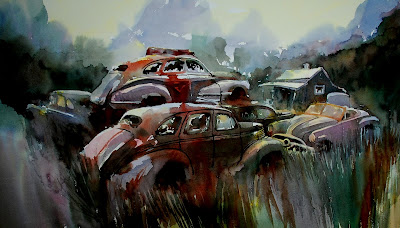 A Cluster of Cabriolets 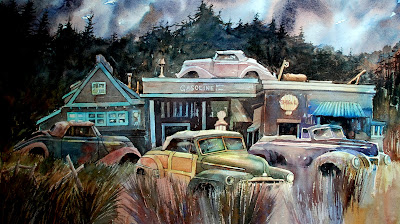 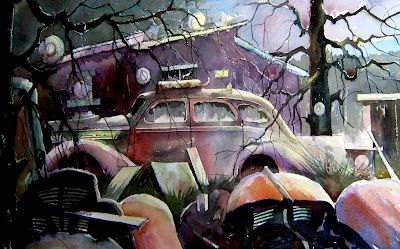 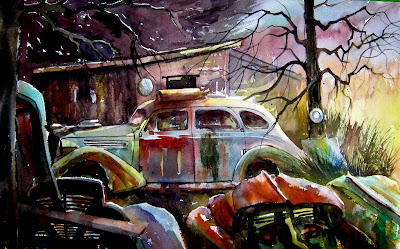 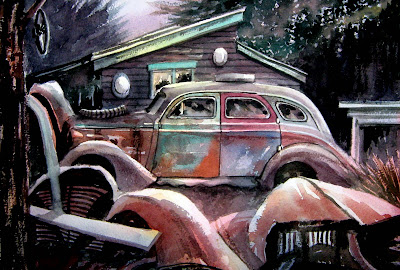 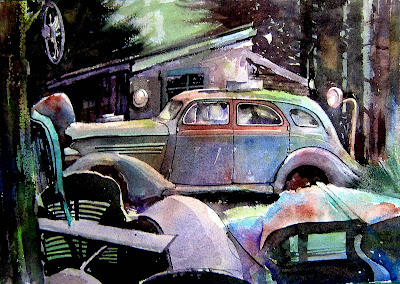 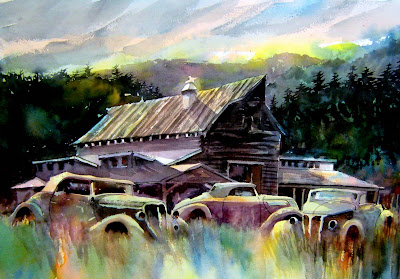 When a farmer advertises an old wreck he has hauled out of a web-infested corner of his falling down barn it is referred to as being "barn fresh".
Posted by Ron Morrison at 11:33 AM 9 comments: