If You Stack Them Neatly, Dear, You Can Keep Them
This is done in a style that I think is my own. Its one of my favourites. Its pretty near four feet wide.

More fun with the stories...

Water Taxi Bootlegger and the Rogue

On a sunny day with a breeze blowing you can almost hear the laughing and bickering of the high school kids as they rode the water taxi to the mainland. Mind you, some of the kids were familiar with the after hours chores of this steel-hulled launch. By day, the owner of this craft was a mild mannered taxi-operator. By night he was a bootlegger. Some of the students were his customers, so it was a poorly concealed criminal enterprise, all things considered. Coastal villages and camps had thirsts that legal vendors couldn't quench. So you'd think that this boat was chased up the rocks on a stormy night by a patrol boat or dashed on the logs by a sou'easter during a gale that blew the arbutus trees flat against the ground. No, the captain and his accomplice were on a routine delivery, clipping along at an honest thirty knots on a moonlit night when outa nowhere they were lifted by a rogue wave and deposited on the beach, ten feet free of the hightide mark. Since they were relaxed due to being half cut dipping into their cargo and relatively unharmed, they climbed down from their lofty perch, surveyed the situation and the hole in the hull, and waited for daybreak and rescue. The cargo was unloaded and the boat was never retrieved.
__________________ 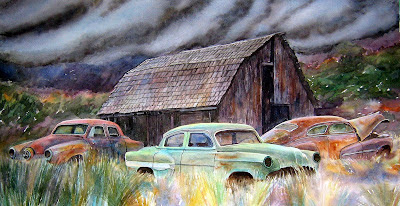 I found the three cars and the barn in the valley and created my own scene. Bink to blow...up!
Posted by Ron Morrison at 8:45 AM 14 comments:

Hanging Out With a Bunch of Hoods (The Origin of the Term,"Magruder")

There's no accounting for the accretion of eccentricities as the years pile up. In this case it was a joint effort, literally. Two ol'boys, the Brothers Magruder, lived in this shack and grew dope of the marijuana variety long before it was a popular career choice of many local residents seeking to avoid the nine to five. Paranoia being the operating imperative of many cash croppers these two built an elaborate early warning system. The cars were left by who knows who and housed speakers and sirens, that were activated by trip wires running everywhere. The scrap metal in the foreground was a booby trap, consisting of holes and cables and nests of razor wire, all guaranteed to dissuade potential intruders seeking to disrupt proceedings. After a successful period of maximizing some rather select principles of free enterprise, the brothers left, probably for Arizona as some of the original "Snowbirds".

Now here's the thing, these pioneers of what has become an important contribution to our economy left another legacy. Its called an eponym, I believe, where someone's name becomes synonymous with a thing he is is closely associated with. In this case the Old Magruders were bachelors or widowers, so we call an old single guy a "Magruder", as in "The old magruder lives in the shack down by the creek."

Painted on a full sheet of Arches C.P.140 using my faves from W/N. The horizontal compo is debatable under epert scrutiny I'm sure, but its just some fun...thats my excuse.

Vintage Tin
There is a certain intangible quality about old tin, as it sits rusting away in fields and junkyards, that fascinates those who discover it. There is a mysterious, eerie sensation of looking into the past through the face of a survivor that compels artists and photographers to preserve these vestiges of simpler times in their paintings and photographs.

These tin derelicts assume attitudes of defiance, puzzlement, and resignation in their stand against the onslaught of weather and metal scavengers. Paint blisters and peels under the scorching sun, revealing layers of colour and primer that both blend and contrast in expressions of abstract art. Faded scales of original blues and greens flake from oxidized surfaces as old metal returns to natural hues.

Memories lie in these metal shells like the dust on their dashboards which even the wind cannot blow away. Faint traces of things past remembering are reflected in glass that is almost opaque, and chrome that is dull and yellow. Shreds of rotten upholstery, hanging from roofs and torn from seats, provoke speculation about particular circumstances that are now long forgotten.