I dug this one out from under the bed. I gotta redo and fix it but I think it will work. Macrotize with a bink.
Posted by Ron Morrison at 4:36 PM 12 comments:

These two were the start of the painting below. I kept adding and rearranging. These are the paintings, the ones where I have a bunch of cars in a group, that I have the most fun doing and they are my personal faves. Stretch the parameters with a bink.
Posted by Ron Morrison at 4:09 PM 12 comments:

Where the roads are rough, sometimes washed out and the crusher never gets there, you can find yards full of cars that are all one make, but different years. They were bought for $25 bucks, mid last century, run into the ground and when they would go no more they became permanent gothic yard ornaments. The next runner brought in and kept running as long as interchangeable parts from the previous wrecks would allow. And then the next one was acquired...thats how yards in remote areas got full of cars. The details man, the details, just give me the details...okay, okay, just bink to blow.
Posted by Ron Morrison at 7:09 PM 25 comments: 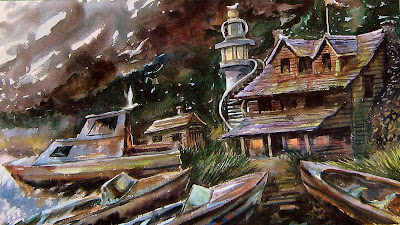 Alright, here's the story. On the other side of the narrows, past the two foot drop where the currents meet, past the thirty foot whirlpool, its as calm as a mill pond. During prohibition some comedian built this house with three stories and his version of a light house. There were logging camps all up and down the coast and fishermen everywhere. Since the cops wouldn't bother going past the maritime hazzards, the setting was perfect for booze and women for rent. Navigation through the narrows at high tide was risky business but highly rewarding whether you were buying or selling. Rum runners did it and brought the women with them. The loggers and fishermen came in from the north and some braved the narrows from the south. Either way they managed to frequent the Logger's Maritime Motel. They came in one lung Easthope double enders, fishboats, cruisers, tugboats, skiffs, runabouts, canoes, rowboats, whatever they could manage. The light was a hollow welded lantern with a glass orb on top. Below the "lantern" was a round room with a fire pit that provided the light and warmth for customers seeking seclusion (however well illuminated). You could see it a long way off and everybody knew what it meant. It lasted through the depression, coast guard patrols shut it down at the start of WW2. They hauled the customers off and nobody went back for anything. You can see strange lighting at dusk, things glowing...maybe its just the sun at a certain angle... Blast for exploded view.
Posted by Ron Morrison at 5:29 PM 28 comments: 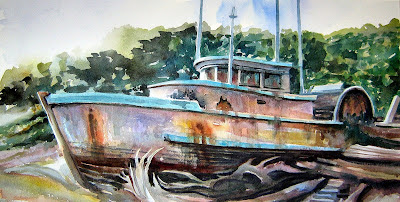 Just playin' around with the paint...like it or don't. Could be the start of some style exploration on my way to nowhere in particular. Panoramic expansion available with mouse bink.
Posted by Ron Morrison at 6:39 PM 18 comments: 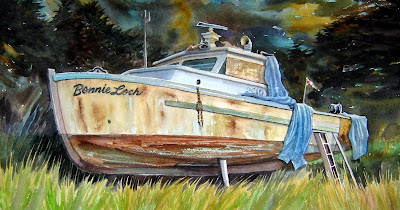 Another land locked retiree, awaiting repairs but more likely abandoned to the earth. Expand your horizons through subject growth-bink.
Posted by Ron Morrison at 6:07 PM 10 comments:

Spent on the Shore of Malcom Island 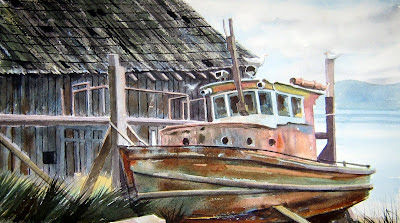 This hardworking boat has finished working and will return to the sea flake by flake. They are everywhere here and yet they disappear as the industry vapourizes. Bink for a closer look at the inner workings.
Posted by Ron Morrison at 12:22 PM 17 comments: 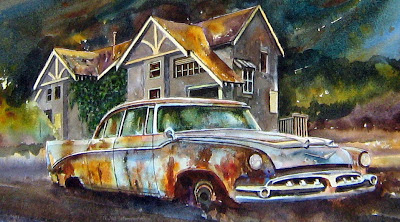 I am exploring the colourful yet gritty approach. I don't think they will be big sellers but they are more realistic yet more exagerated at the same time or something. This building actually sits on the Fraser River in North Bend. Splode it.
This building was a "Logger's Hotel" on the bank of the River Fraser. The car has no relation to the abandoned lodging. Its a "runner" that conveniently died by an open space where it underwent the ritual "tire letting". Buy it for 25 bucks, run it as long as you can "haywire" it together and the brakes last and where it dies is where it rests forever or until the crusher comes.
Posted by Ron Morrison at 7:16 AM 19 comments:

Plymouth Among the Rocks and Grass 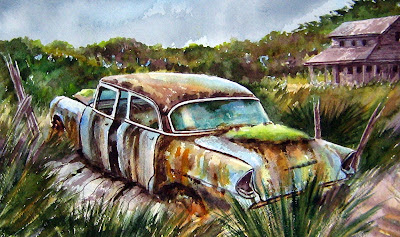 Allrighty then, I redid it with a rock under it. I like this style. 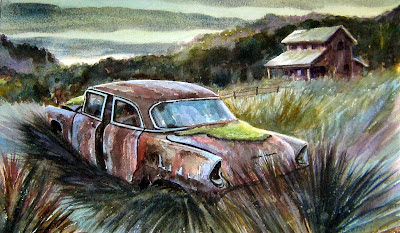 This forlorn specimen is sitting in the yard of a homestead that has been abandoned since 1966. We have Scotch broom everywhere now and it grew out from underneath this wreck. And moss is actually growing on the trunk and hood. Blow it up.
Posted by Ron Morrison at 4:30 PM 20 comments:

The Bel Air Sat in the Salt Air

Now this gorgeous car was left on the beach in a remote area of Vancouver Island. It came into a logging camp on a barge and was left when the camp burned, nobody came back for it. Why it was taken in in the first place is a mystery or why it didn't burn for that matter. Its gone now so don't bother looking. Bink for more in depth baloney.
Posted by Ron Morrison at 3:01 PM 22 comments: