The Home of the Surgeon 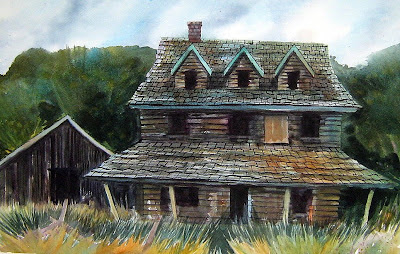 Trying to get a back to basics look here. Unembellished. I am going to add some silliness and cook up the story. Bink for a revelation.
My grandfather built this house, he was a surgeon in the first world war. He married my grandmother in 1916. While courting her he was married to another woman and engaged to a third. He sorted out his affairs (literally and figuratively) and legalized his preferred choice. My grandmother was the illegitimate daughter of a very famous English poet and claimed to have been born on Christmas day, 1900, which would have made her a child bride. When my mother found my grandmother's birth certificate after she died it showed her birth date as 1896, making her almost twenty when she was married. My grandfather the surgeon was twenty four years older, which might explain his large inventory of partners, present and past. He built this house in 1919, by which time they had three kids under four. When the flu swept through, they lost their precious three year old boy. My grandmother was so upset that she would no longer live in the house. She wanted to move to a more moderate climate with no mosquitoes and warmer winters. My grandfather who was shell shocked and partially deaf told her that if they moved he would never build her another house. They moved and rented for the rest of their long lives. He never practiced medicine again.
__________________

Not a car in sight, what happened??? Great, spooky house. You can do a lot with this one!

Thanks Joan, no cars? hmmm...I can fix that!

Love the one covered window...adds a sense of mystery. Can't wait to hear about the Triplets...the mystery continues...
Do you use black paint for the lines of the roof shakers, or ink?
They have a lovely ripple to them...delicious!

Thanks Tracy, I usually just mix something dark from my dirty palette but in this case I used burnt umber and neutral tint.

interesting piece of work, Ron. i keep getting the feeling that something is about to happen..a face in a window suddenly appearing, Christine(of Stephen King fame)flying out of the old garage......spooky.

Thanks Billie, I was tempted to do that, put some things in the windows, but I thought leaving it to the imagination would be fun and then maybe redoing it with more silliness later on.

Hey! That's not a silly story...that's a sad story! Smarten up!
And...wait...I thought your grandmother was Metis?! Must be the other grandmother...

The nature of watercolor makes it like clouds...you can see things in the settling of pigments...like shadows in the windows...and in the dark background...wonderfully mysterious.

Tracy, it was sort of sad but this story is true. They had six kids that lived, three boys and three girls. She was the illegit daughter of a famous poet. The boy (my uncle) died in the flu pandemic of 1919. My grandfather finished no 1 in his class at Boston College, which was a premier med school, and graduated sometime around 1906.

Nice painting with a wonderful tale to go with it!

Thanks Jeffrey, just a little family history to go with the paint fun.

great house and story. I like the angled columns. Adds some fun to it :)

Thanks N.N. with those posts, howintheheck does the porch roof stay up, thats what I want to know.

Great painting Ron and riveting story to match. I'm always a sucker for the historical especially when it goes out on the limb. Wonder what the surgeon would think of today's real estate prices? Keep 'em coming!

Thanks W.K. The surgeon's house would have cost less than two thousand dollars to build including property. He lived to see my dad build a house in 1964 that was just as big for $35,000 and that sold recently for $800,000.

Ha, there's a big looming smile coming out of that house!

Captivating story and I'm getting tired of using the word "wow". There must be another one that would explain my awe. I love the way you did this house, the roof.

The house looks lonely without any cars. Nice job.

happy to now be "up" on the story...interesting as I knew it would be, and done as well as your paintings! I imagine having a 'rich' history such as yourself can only lend positively to a great imagination!!

Thanks Holly, the history is interesting, I'm boring.