White Lightening and the Black Mariah 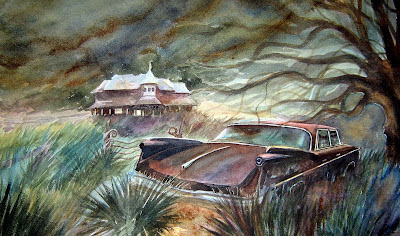 White Lightning and the Black Mariah
For those of you with tender sensibilities, dwell not on the details of this morality play, the lesson is unclear, but the tale entertaining I hope.

With the proceeds from his private distillery, this free-enterpriser built a replica ante belum mansion in the style of the Victorians. Long after prohibition he maintained a hobbyists interest in the distribution of his product - "white lightning". He had two sons, one was relieved of his mortal coil in a friendly fire napalm incident in Vietnam and the other was lost in a firey crash on a bad track in some backwater hellhole (don't jump out of your knickers, its just a word). Due to his poor attitude about the inequitable distribution of divine providence, his wife bolted for town. Annoyed with his God and anxious for a face to face with his maker he dispatched himself for the showdown with a colt forty-five.

What is left behind is the shell of the house and his last rum runner. It is a four-door "sleeper" with a three twelve wedge and dual Holley four-barrels. He called it the Black Mariah. Now curious thing about these cars is that they were built with steel that was bought from the Japanese after WWII. The steel was reclaimed from the blast sites at Negasaki and Hiroshima and sold as part of the post war rebuilding of Japan. Problem was, that since it had been irradiated, apparently it rusted quickly. And quality control on these cars was bad. But this one has sat for forty years and is still intact.

It seems that a ghostly light, strange and nonsensical (like this story) floods this hollow on occasion and provokes from the viewer speculation about circumstances that have uncertain details. I did not want to "fix" this painting by correcting its flaws because the light suggested the story to me. So I just stopped painting and wrote the story fearing by fixing the goofiness I would ruin the effect. Its doodled on the back of a scrap of Arches. Its from the imaginato of course...I did look at a picture I had taken of the car for reference and went from there.
Posted by Ron Morrison at 7:45 PM

I think this one says all that was intended beautifully Ron.
You would want to step very carefully, not to mention quietly and on a much brighter day then that pictured here, if ever ones curosity pushed you to explore these spirit filled environs.
Yikes!!!

Yes Jeffrey, a person would certainly have to be wary even on a bright day with no "atmospherics" to add to the creep factor.

A modern day Sleepy Hollow...expecting to see the headless rum-runner charging through at any moment. That car is a kick! Fun stuff...another to add to your Imaginary Places of Vancouver Island collection.

Thanks Tracy, I thought of it as being in the southern states but maybe it could be local.

Thanks Billie, spooky was what I was after...fun spooky~!

Oh, in the southern states...okay, well then my grandpa's ghost could be hangin' out there...runnin' moonshine was one of his first jobs!

I had to read the story--for something thought up on the fly, it's incredibly engrossing. I've always wanted to do comics of tragic tales like that.
As for the painting, I love the hazy look, and I love the perspective on the Black Mariah. Looks like a 'ghost's-eye-view'.

Thanks Sandy, they are just plain ol'fun!

Thanks Grimm, its pulp fiction stuff isn't it?

Ron you have outdone yourself, again. This one is really cool "goofiness" and all. Love the tree and the car and the ominous atmosphere. Very cool.

the tree is really cool and the car looks great. Of course the story fits. You're probably great at campfire stories :)

Thanks Michelle, I am trying to do sort of "stream of conscious" stuff just letting'er rip!

Thanks N.N. I usually forget my stories about half way through...

That's the best kind of fiction!

Wow! Marvelous Ron, on both the literary and visual front. Made my day!

You surely have a way with watercolor Ron,,,
and stories.
Both are terrific!

Thanks Babs, I am now planning a career in abstraction, the heck with watercolour...

This one has such an eerie quality to it!!

I keep coming back checking for more and I keep seeing this and every time I do it still blows me away.

Thanks Sandy, its a busy time but I will get to painting shortly.

I love dark pictures, but I don't see very many of them. This image just reaches out and grabs you!
Debi Watson

Thanks Debi, its a pulp fiction fun piece.

"Wonderful painting but surely all of these things couldn't really happen to one family" she quipped from bed in intensive care.

Thanks Cara, you wouldn't think so...

Still looks as good as the first time I saw it.
#:-B

Oh, I love this! You're really good at this stuff! I wish I had talent like this. :D