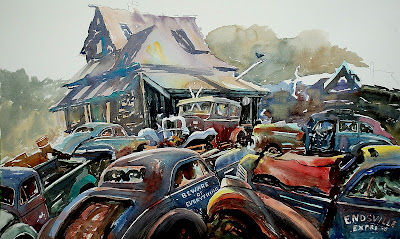 When we were kids, my best buddy's dad decided that he'd had enough of being broke in the winter when work died down. So, in the spirit of unregulated free enterprise, he slapped a wooden sign on the roof of his car and went into the taxi biness. Being an incurable eccentric and part time misanthrope he called his "cab" the "Endsville Express" and he took great delight in driving right by potential customers of high standing in favour of drunken bums who were headed for the one and only bar in town. The taxi would park at the bar until closing time and he would drop whoever climbed aboard off on his way home. The taxi clientele ended up stranded more often than not, sometimes at his place. This lasted a coupla weeks until the cops visited town and put the kibosh on his venture.

The "taxi" went back to civilian life and ended up in the collection of the magruder who bought it for 25 bucks in 1962. Someone took the sign and all that is left of any indication of the brief service is the door.

Gorgeous painting - and love the story behind it!

Studio at the Farm said...

Another great one, Ron, with a good story to go with it.A few days ago, I went back to the beginning of your blog, and very much enjoyed your stories, and the evolution of your art. Good times!

Thanks, Jan, how are you?

Thanks, Kathryn, I have made some progress I think in the last couple of years...I hope, maybe...