The Colorful Ride of the Reverend Reyne Beau-Hughes 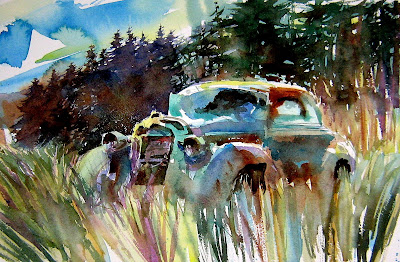 Now, the guy that owned this rig was no more a reverend than I am. He was in fact the charismatic leader of a merry band of loons who built a commune on a bluff overlooking a remote stretch of beach on the island where I live. He was called "The Reverend", facetiously or ironically or sarcastically or something. He was a dope smoking faux mystic who led his flock in the worship of the lunar tides, the winter solstice and whatever other excuse he could cook up to get thoroughly stoned. It was the sixties and the "back to naturites" fled the cities and set up shop close to the water and became hippies or acolytes to a convenient guru (or both). When the local loggers got a load of the rastafarian do's and bright colored clothes of the congregation when they were on a field trip, much merriment ensued. The loggers and fishermen had a consuming pre-occupation with the hippy chicks and political correctness hadn't been invented yet so the comments weren't necessarily what we have come to think of as "acceptable" but they were often quite comical.

The commune's transportation needs were met with the de riguer V.W. Bus and an old school bus, but the "Rev". had his own personal ride, a 1935 Plymouth business man's coupe (hows that for irony?) When it bit the dust and was literally put out to pasture with a coupla goats who ate the interior, it had to be suitably honored. So the whole L.S.D. fueled bunch painted it with the remainders from their shack painting projects. The left over paint was bright enough and applied with so little actual planning that its presence long after the commune had vapourized was a puzzlement to all who saw it.

Rainbow Hues....colourful
Posted by Ron Morrison at 11:56 AM

Looks like they coated the grass as well with their love-coated enamel.

Great color in the auto! I love your grasses and background trees. Always a joy to see. Happy 2009!

Aaah those were the days eh Ron...
Love the car and the angle you got on it (pun intended)!!

Thanks, Joan, same to you!

Thanks, Jeffrey, yes and very clever, consider that borrowed (angle).

Wonderful painting and LOVE the story - great way to begin the new year - by the way, Happy New Year!

Ron, you should write a book. you can spin a good 'yarn' with the best of them!

Thanks, Cara, I was going for the watercolour strokage in this...

Thanks, Foz, I am just pulling the wool...